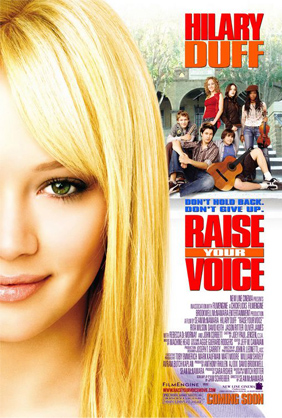 A coming-of-age story centered around a small-town singer, brokenhearted by the death of her brother in a car crash, who had secretly submitted her for a summer session at a performing arts academy in Los Angeles.

In the performing arts academy, she experiences a whole new way of life in the big city, far from the small town lifestyle she’s used to. The film will revolve around her efforts to confront her lack of formal classic training and deal with a romantic entanglement.

“Raise Your Voice” raises the bar for movies geared to teens. It’s particularly good at capturing that time of life when you simultaneously believe everything is possible and that each tiny misstep is the end of the world. The characters, students at a music conservatory, are imbued with recognizably human traits such as insecurity and jealousy, instead of being portrayed as Stepford kids, more typical in this type movie.
(San Francisco Chronicle) — read more >