Scene from the Movie 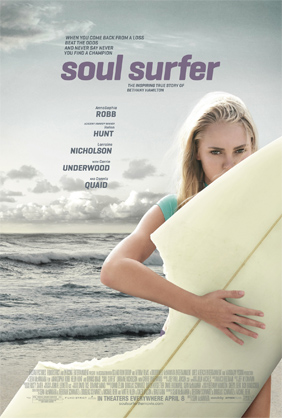 13 year-old Bethany Hamilton is a champion surfer who was born to be in the water. But after a fun night out night surfing and what should be a fun day in the water, she is attacked by a shark and loses her arm.

Rushed to the hospital, she remains calm, and maintains her faith in God. Now she has to re-learn how to do everything with only one arm – including how to surf. It will take her friends, family, and her Christian faith to get her back into the water, but if that is where she is meant to be, she will find a way to get there.

Sportswriters invariably call any last-minute heroics or unbelievable upset a “Hollywood ending,” yet in reality Hollywood usually does a poor job with sports stories based on real-life events. Such stories force filmmakers to drastically alter the filmmaking playbook, draining away all color or quirks of personality from characters based on living people and removing any complications that might distract viewers from the “inspirational” message they’re determined to convey.
(The Hollywood Reporter) — read more >

Stories of girls – and women – tend to get short shrift in the multiplex. So it comes as a nice surprise that as of today, there are three young heroines for moviegoers to cheer on as a feral teen named Hanna and a resilient survivor named Bethany join the ever-intrepid Jane Eyre? on the big screen.
(Denver Post) — read more >

One of a series of “inspirational” Hollywood films consciously aimed at both faith-based audiences and a more general public, this is a well-meaning, handsomely staged biopic of the top Hawaii-based surfing star Bethany Hamilton who lost her arm to a shark in 2003 at the age of 13, but through her Christian conviction went on to become a global heroine and top surfing professional.
(The Observer / The Guardian UK) — read more >