The Trial Of Old Drum 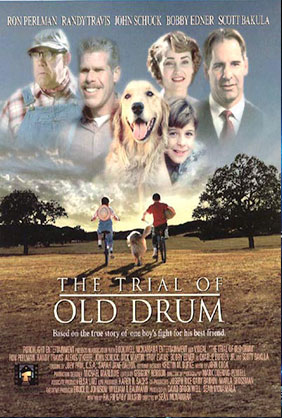 Inspired by a true story set in Missouri, “The Trial of Old Drum” tells the story of a valiant golden retriever, Old Drum, an orphan dog that becomes a boy’s best friend and is then forced to stand trial for killing a neighbor’s sheep. Charlie Burden [Bobby Edner] is a typical eleven-year old boy growing up on a farm in Western Missouri. His summer days are spent helping his dad [Ron Perlman] run the family farm, while also finding time to go fishing at nearby Miller’s Lake, always accompanied by his faithful golden retriever, Old Drum. Scheming with his best friend Dee [Alia Shawkat] to build a secret raft, Charlie nearly drowns, only to be rescued by Old Drum. But Charlie’s life is turned upside down when his cantankerous Uncle Lon [John Schuck] accuses Old Drum of killing his sheep. The town is divided over Drum’s guilt or innocence, and an old family wound begins to fester. Losing sheep in this part of the country is not taken lightly. Looking to rid the town of a sheep killing menace, Lon files a lawsuit seeking to have Old Drum put to death. Desperate to save Old Drum, Charlie and his father try to obtain the services of one of the state’s best known lawyers, George Graham Vest [Scott Bakula]. At first hesitant, Vest is genuinely moved by Charlie’s pleas to save his dog and agrees to take the case. As the trial progresses, the evidence mounts against Old Drum. Having exhausted all legal maneuvering, Vest has one chance left; his closing argument. Vest knows that this speech is a matter of life and death for Old Drum. As he turns to face the jury, he instills in the community and forever memorializes the phrase that “A dog is a man’s best friend.”